In this 2-minute video, I present the basics.

Infectious disease is obviously a major problem in the U.S. and worldwide. To compound that, at present, supergerms caused by the overuse of antibiotics additionally present one of the greatest dangers to human health in the U.S. and much of the rest of the developed world. At the same time, in developing countries infectious disease is so rampant it often threatens to cause global pandemics, as we know all too well.

All evidence to date strongly supports the position that Humanity Silver with Opti-Silver changes the game in fighting infectious disease, perhaps better and more safely than anything else on Earth. We’re working to distribute it to millions of people who are suffering and dying needlessly of infectious disease, for human use  in the U.S. and in low-income regions of the world, and for water disinfection in low-income regions.

Over half-a-million bottles of this ionic silver formulation have already been used in the field, with a truly astonishing track record that is easily demonstrated.

Of all my patients whose conditions would not respond to any conventional treatment for the entire range of infectious disease I saw in my practice over a four-month period, the success rate with Opti-Silver has been staggering – well over 80%. I don’t know of anything that has a better risk/benefit ratio and effectiveness.

With normal use, it has no unwanted side-effects whatsoever, and all evidence suggests that it not only doesn’t create supergerms like antibiotics but it successfully kills many if not most supergerms. And, unlike antibiotics, it’s not only antibacterial but is also antiviral.

One doctor made the the following statement after distributing thousands of bottles of the product:

Opti-Silver represents as much of an advancement in the medical field as the printing press and microchip did in their fields.

This chart from a hospital’s lab records shows the white blood cell count of a patient who was given a week to live before the Opti-Silver ionic silver complex was utilized. (It was a retail product called Silver 100, which contains the identical Opti-Silver formulation contained in Humanity Silver.) Intravenous antibiotics were not working and the family was told to make funeral arrangements. The chart shows that within a few days after introducing the ionic silver the while blood cell count dropped from critical to normal. (This case is discussed by the attending nurse in detail in the very compelling video interview, further below.) 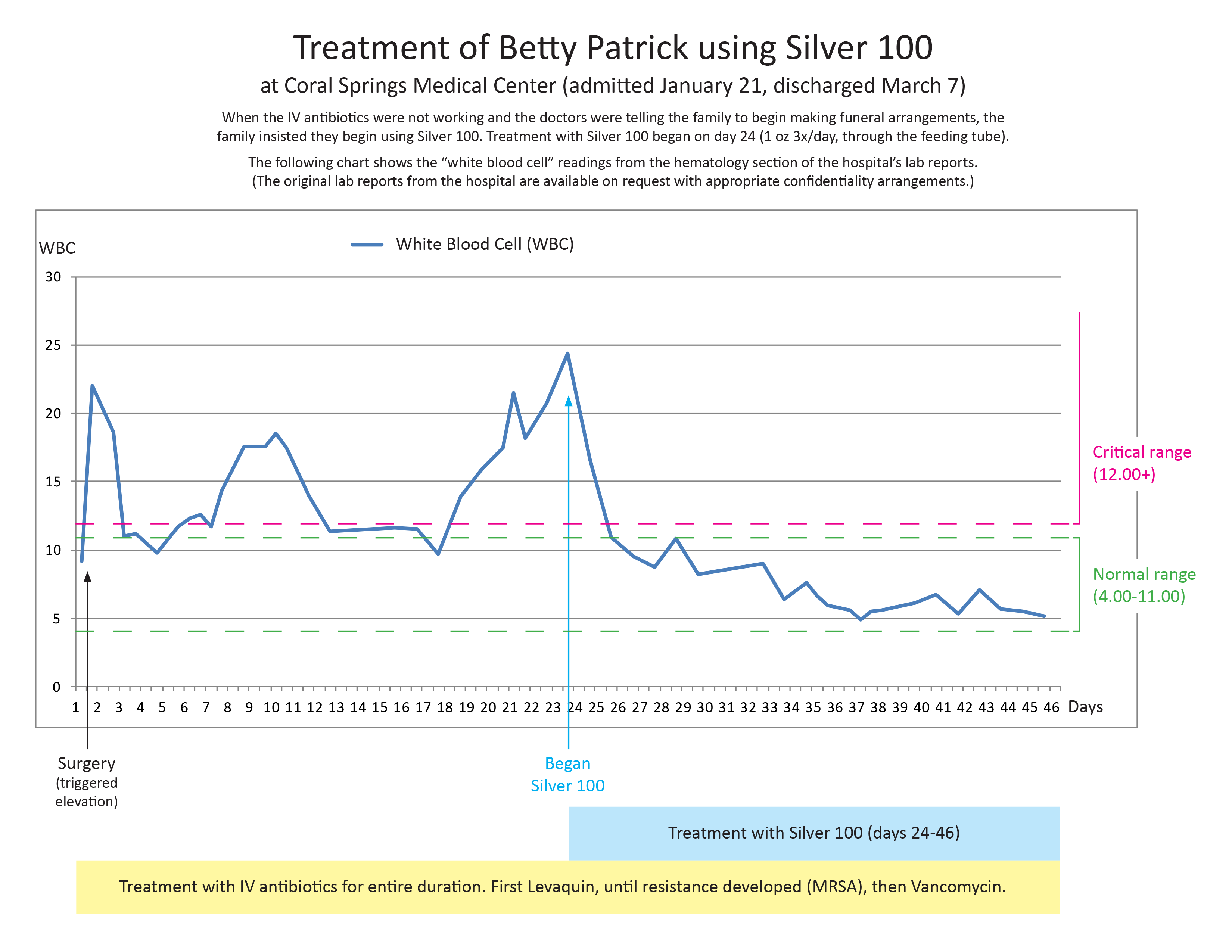 In the following 7-min video interview, a nurse with fifty years of experience, who has been a forensics witness and voted Professional Woman of the Year, relates her remarkable experiences with the technology – including saving an elderly woman’s life in the hospital after the family was told to make funeral arrangements, and seeing a co-worker who acquired HIV become “undetectable.”

We don’t know how much further this will go, but I imagine if it continues to do the things I’ve seen it do, the impact on the world will be tremendous.”

Pat is not your ordinary registered nurse. She’s been in the field since she was a teenager and has run more facilities than most nurses will ever work in. Here’s her very impressive resume.

(She was not paid for this interview and has no financial interest in the product whatsoever.)

Herb Slavin, M.D., founder of the Institute of Advanced Medicine, treated a patient who had hepatitis B and C who did not want to use the common medications interferon and ribavirin due to the risk of serious side effects. Dr. Slaving treated the patient with the Opti-Silver ionic silver complex (in a retail branded product called Silver 100, which is the identical formulation as Humanity Silver). Dr. Slavin then wrote a letter summarizing the lab work and the results of the treatment: 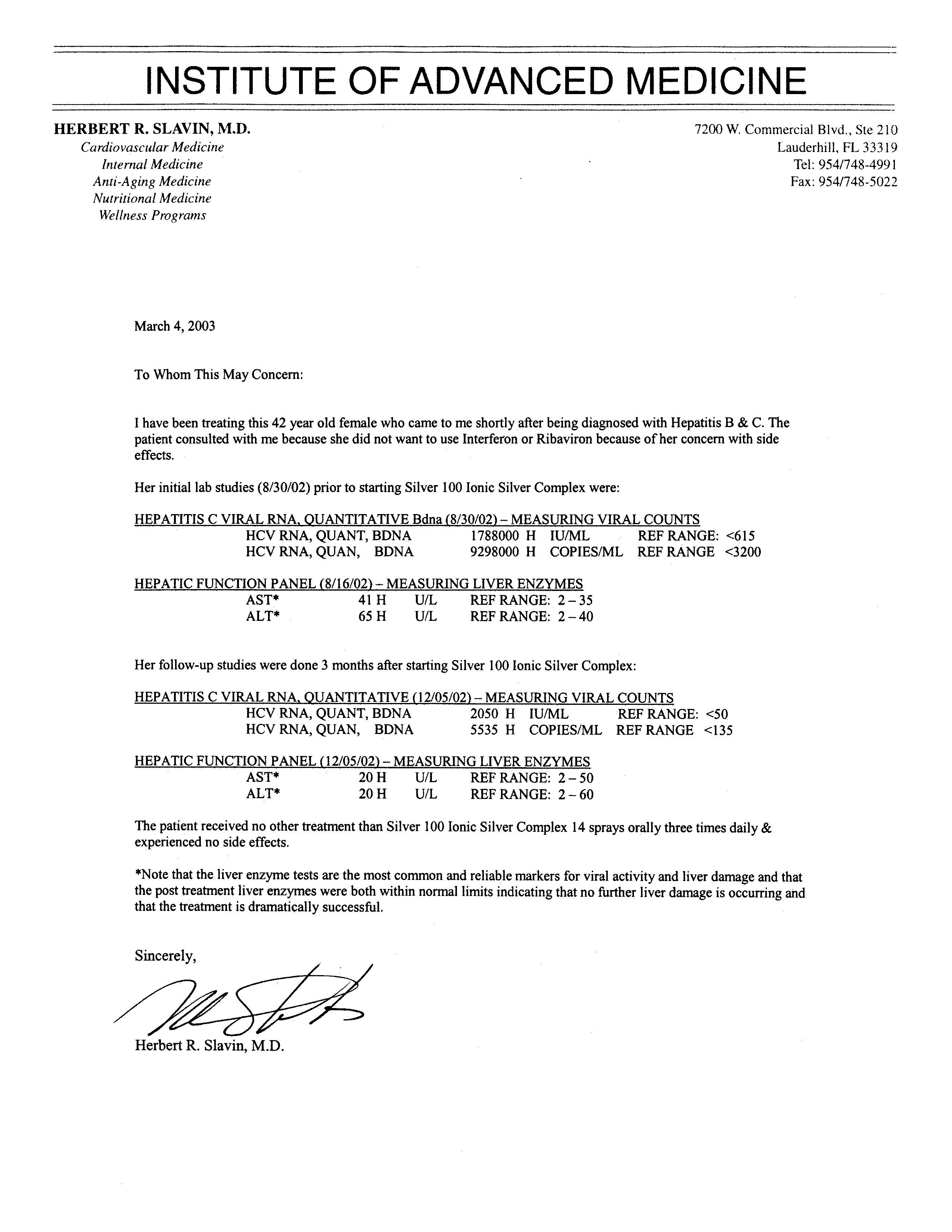